As far as I know there are only four Cardiff records for Scarlet Tiger: two in 2006 (both made by DRWG - one in his Roath garden and one at the Heliport) and then, nearly a decade later, two in 2015 (another in DRWG's garden and one in my Llandaff North garden).

The moth seems to be on the increase in South Wales and I wondered if, given the 2015 records, they might now be breeding in the capital. Today I was walking my daughter Bethany to a birthday party in Whitchuch and spotted a comfrey plant riddled in holes and with at least 10 Scarlet Tiger larvae sitting on the leaves. 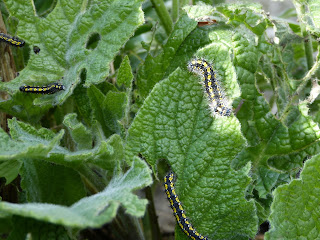 This was in someone's front garden, but at the end of their driveway and easily visible from the pavement without looking too suspicious (easier with a 5 year old in tow). The location was Heol Gabriel, a couple of houses to the east of Whitchurch Brook on the north side of the road (ST15927927), if anyone fancies a look.
Posted by GMT at 20:33
Email ThisBlogThis!Share to TwitterShare to FacebookShare to Pinterest