I have had the box out on four occasions for Winter GMS during January - 07th (10C min), 15th (10.4C min), 20th (-2.3C min) and 29th (8.2C min). The minimum temperatures have been quite good for January and the winds have tended to ease back during the nights but I have only had 5 moths (3 x December Moth, Mottled Umber and Chestnut) - and they were all logged on 07th. I have had 3 nights of nothing since then.

I have to say that this is an improvement on 2015-16 when I had 5 nights of nothing during January!

Has anyone else seen anything this year ?
Posted by Howard Burt at 22:27 5 comments:
Email ThisBlogThis!Share to TwitterShare to FacebookShare to Pinterest

The Winter GMS boxes put out on Xmas and New Year weekends produced a grand total of nothing, so I was surprised to find a Mottled Umber on the house wall last night. Must have been attracted by the light from the kitchen window as nothing else nearby. Anyway ... first moth of the year and a good month earlier than the first visitor last year (Chestnut on 04 February). Strangely, like Mark's Winter Moth, Mottled Umber was also the last moth I saw in 2016 (16 December). 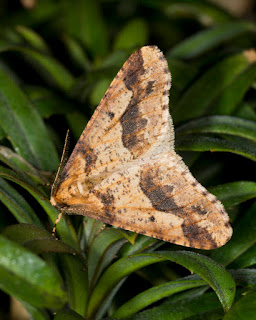 Posted by Howard Burt at 19:38 No comments:
Email ThisBlogThis!Share to TwitterShare to FacebookShare to Pinterest

This Winter Moth appeared at our kitchen, late New Year's Eve and was still there, well after midnight, so was may last moth of 2016 and the first of 2017.

Happy New Year to you all!
Posted by Mark Evans at 08:11 No comments:
Email ThisBlogThis!Share to TwitterShare to FacebookShare to Pinterest
Newer Posts Older Posts Home
Subscribe to: Posts (Atom)