Having only lived in Pontycymer for a year, Saturday night was the first time I'd caught anything at this time of year. I'm certainly glad I set the trap as even though the numbers were fairly low (20 moths of 8 species) there were a couple of good ones: 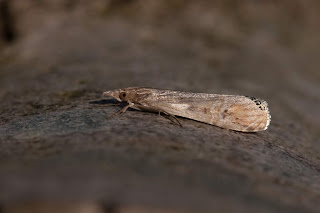 Euchromius ocellea (thanks to George for the identification) is a rare migrant I believe and was unusually obliging for a photograph..Sam also caught one in Carmarthenshire on Saturday night so there must have been a small influx.
The other highlight was a Dotted Chestnut - I've caught them a couple of times but it was great to get one in my garden. 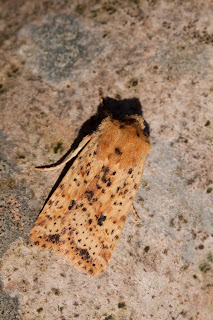 A Dark Sword-grass was the only migrant in our garden trap last night, but we also popped round the corner to see Chris Brewer's catch as he found this exceptionally early Scarce Bordered Straw in his trap. 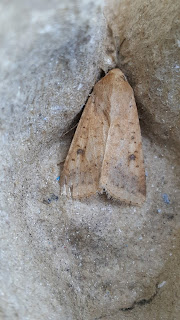 Posted by Barry Stewart at 11:54 No comments:
Email ThisBlogThis!Share to TwitterShare to FacebookShare to Pinterest

My first post of the year is of old news. Last July Anne Mansfield, a visiting moth'er from Norfolk stayed on Gower for a few days and caught this rather lovely moth. She thought at first it was Ni, but in then end settled for Beautiful Golden Y and posted it on her blog. Fortunately someone suggested that she get another opinion so she sent the photo to me.

Whilst Scarce Silver Y is an upland species, found in the northern parts of Glamorgan and then up through Wales, it is also known to be an occasional immigrant. 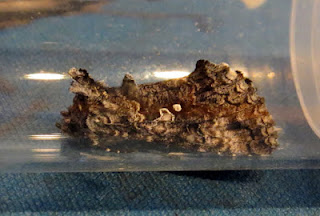 Posted by VC41Moths at 12:14 No comments:
Email ThisBlogThis!Share to TwitterShare to FacebookShare to Pinterest
Newer Posts Older Posts Home
Subscribe to: Posts (Atom)