The evening rain, drizzle and fog cleared sometime overnight and this morning I had a moth. Yes a moth. Actually a Pale Brindled Beauty and a welcome sight at that.
Posted by Mark Evans at 15:10 No comments:
Email ThisBlogThis!Share to TwitterShare to FacebookShare to Pinterest

The map below shows the number of species recorded in each 10km square (according to my copy on MapMate at the moment) since 2004. I've highlighted six squares in red as to me these figures seem on the low side, and could be useful areas to look at trapping for the purposes of square bashing.

Incidentally, I did not mean to imply that I did not think the squares on our northern boundaries were not worth trapping, merely that without checking with Norman how well these squares are covered from his side of the boundary. I suspect not very well, but you never know! 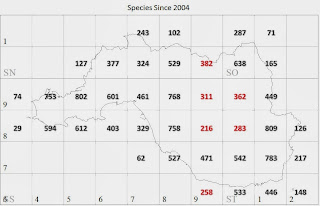 In spite of what I said in my comment below, I've looked at the SEWBReC database and updated the outlier figures: 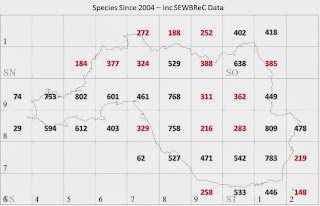 This so SO11 is as much need of further recording compared to some of our more central squares - but don't let that stop you getting out to them if the mood takes you!

And following George's request for macros only: 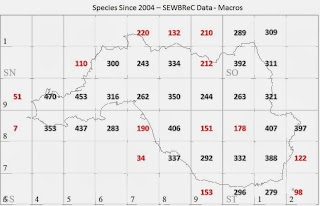 This is taken solely from the SEWBReC database, which should be up to date, but there may be some slight discrepancies from a MapMate produced equivalent. It still seems to indicate the same areas are not well recorded, but perhaps the SS99 and ST09 are not as badly off as first appeared!
Posted by VC41Moths at 10:08 20 comments:
Email ThisBlogThis!Share to TwitterShare to FacebookShare to Pinterest

Just to follow up on George's post about BC's atlas project, the image below should (formatting permitting) show the number of species recorded from each of VC41's 10 km squares in each year since 1991, when the peak number of species was reached in that period and what the square's total species count is. I've not distinguished between squares that are coastal or on our boundary, but it might give us something to work on!

Posted by VC41Moths at 15:24 7 comments:
Email ThisBlogThis!Share to TwitterShare to FacebookShare to Pinterest


For those who don't receive Butterfly Conservation's e-moth newsletter, the following item from the January newsletter may be of interest:


"IMPORTANT ANNOUNCEMENT: A Macro-moth Atlas for Britain and Ireland in 2018

The production of a full, hardcopy atlas of the larger moths has always been the intention of Butterfly Conservation, but the timescale was dependent upon the progress of the NMRS. Due to the success of the scheme we now plan to work towards the publication of an atlas of macro-moths in Britain and Ireland towards the end of 2018, in collaboration with MothsIreland. It will be based on records up to the end of 2016, providing moth recorders across the land with three more full years of fieldwork towards the planned Atlas.

There is a substantial amount of work to be done between now and the end of 2016; the historical baseline of the NMRS needs to be improved and targeted recording of under-recorded squares is another challenge. However, we hope that making this announcement now will stimulate further recording effort and encourage County Moth Recorders, local moth groups and moth recorders themselves to redouble their efforts to achieve the best possible coverage of the country.

To find out what squares are under-recorded in your area or indeed other areas please contact the relevant County Moth Recorder in the first instance. In due course we will be producing a list of under-recorded 10km squares based on the NMRS database. However, this may not be 100% accurate as there may be records that we have not yet received from the County Moth Recorder network."


Time for us to start thinking about targetting under-recorded squares in VC41? I know we have better coverage than most counties thanks to all the efforts in amassing records for 'the book', but there are still some under-recorded areas, e.g. parts of the Vale and central uplands.
Posted by GMT at 12:19 1 comment:
Email ThisBlogThis!Share to TwitterShare to FacebookShare to Pinterest

Week ten of the winter GMS already and although the night started very wet and ended rather chilly, my actinic garden trap still managed to attract two moths: Ypsolopha ustella and a Common Quaker, while at the kitchen window and  rescued from an abandoned web of the spider Zygiella x-notata, a Mottled Umber. Three species isn't bad for such an unpromising night.
Posted by Mark Evans at 19:49 No comments:
Email ThisBlogThis!Share to TwitterShare to FacebookShare to Pinterest


2013 was a year of such contrasts that instead of the usual year-by-year comparison I thought I'd have a look at my garden trapping results broken down by month, which are shown in this table:
This highlights what an amazing July we had, with the 210 species recorded being more than my annual total for 2007 and 2008. 25 new species for the garden in July alone was nearly as many as in the whole of 2012. At the other end of the spectrum, March produced just 3 moths in the 7 nights I ran the trap, and things didn't really improve much until June.

All of this leaves my garden Lepidoptera list poised on 499 species. How long will I have to wait for number 500? If we have a spring like 2013, it could be some time.

Those of you that venture onto the county list page may have noticed that the lists are in the process of being updated to follow the new nomenclature. It is not a speedy process as there is no electronic version of the list available as yet. I've nearly finished adding in the new numbers, and re-ordering, but as I'm fitting this in with other (more important?) tasks it will be in a rather incomplete state for a while, and the new names may have to wait for the electronic list.
Posted by VC41Moths at 08:42 2 comments:
Email ThisBlogThis!Share to TwitterShare to FacebookShare to Pinterest
Newer Posts Older Posts Home
Subscribe to: Posts (Atom)