The forecast was for a warm-ish night, but the sky stayed clear and the temperature dropped to 4.9C from 8C at midnight.
Six moths in/around the trap - a couple of Chestnut that had seen better days, a couple of March Moth, Oak Beauty (3 weeks earlier than last year) and Pale Brindled Beauty.

Posted by Howard Burt at 23:05 No comments:
Email ThisBlogThis!Share to TwitterShare to FacebookShare to Pinterest 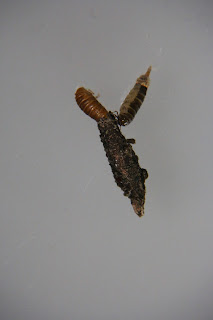 And within a day of being brought inside, a female had emerged. Being female I'm still not 100% certain on the ID, but it is another step in the right direction!
Posted by VC41Moths at 12:38 1 comment:
Email ThisBlogThis!Share to TwitterShare to FacebookShare to Pinterest

Back in 2004 I found a larval case at Radyr train station that I tentatively identified as the Psychid Bankesia conspurcatella. At the time it would have been new to Wales, and the various experts that I showed it to were not sufficiently familiar with the case to be able to confirm it without an adult male. In January and February 2005, I found winged males of this species in Gabalfa, adding some weight to my identification of the Radyr case, but it could still only really be considered an unconfirmed records. There have been no further records in Wales (to my knowledge) of this species.

Yesterday, on a SEWBReC outing to Forest farm I was able to spend a fair amount of time around searching the area around the original location and eventually found some cases that match that original 2004 case. All four cases were on or around the footbridge that crosses the Taff between the station and Forest Farm.

The literature suggests that they should be pupae at this time of year, with the adults emerging in the next few weeks - but my Gabalfa records suggest that the flight period is already over so I'm not confident that I'll get any adults from the cases I collected, but you never know. I am 99% certain that they are Bankesia, but it would be good to get that confirmation!

The cases are not very photogenic, but if anything does emerge I will post something here!

Posted by VC41Moths at 09:22 No comments:
Email ThisBlogThis!Share to TwitterShare to FacebookShare to Pinterest
Newer Posts Older Posts Home
Subscribe to: Posts (Atom)