Tunnels and a Cold Case

On Sunday 1st December, Mike Hogan and I made our annual visits to the disused railway tunnels in the Merthyr and Cynon valleys, to count the overwintering Herald moths.

In the Pantcadifor tunnel, at Cwm Taf Fechan, we counted 37 Heralds, which is the second highest count for the eight years we've been doing this one and a vast improvement on the winter of 2011-12, with a measly 5 and winter 2012-13, with an only marginally better but still miserable 9. The highest total for this tunnel was 64 in 2006-07.

This was the ninth annual count of the moths in the Cefnglas tunnel, between the lower Merthyr and Cynon valleys and with a total of 82 Heralds, it was the highest number counted in all those visits and like the Pantcadifor tunnel, the total dwarfed those of 2011-12, which was 8 and 2012-13, which was 19. The previous highest total for this one was 62 in 2009-10.

While searching for the Heralds in Cefnglas tunnel, we discovered a dead micro, still clinging to the roof of one of the arched "Manholes", set into the sides of the tunnel.

It is in a delicate state, but I think it is a 'tort' of some sort. Any ideas? 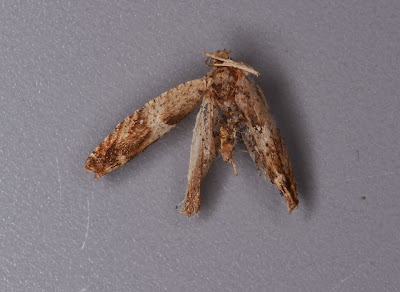 Out of the county, On Saturday, while driving past Weobley, Herefordshire, a Small Tortoiseshell flew across the road and over my car.
Posted by Mark Evans at 15:48
Email ThisBlogThis!Share to TwitterShare to FacebookShare to Pinterest