A micro-moth flew across Mansel Street as I was walking from the BC Wales office to Swansea Railway Station this afternoon. 'Probably just a light brown apple moth' I thought. Luckily it came to rest on some iron railings by the road and I could hardly believe my eyes when it turned out to be Acleris hyemana, a moth I've long wanted to see 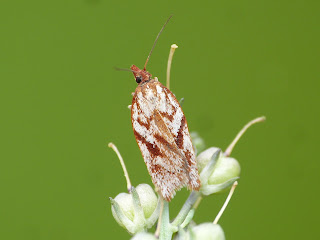 This is a moorland species with just 6 previous VC41 records, mostly from the western part of the county. There is a record from Kilvey Hill not too far away - perhaps it wandered from there? There is a little bit of heather closer to Mansel Street, on the steep slopes in the Mayhill and Townhill areas of Swansea but I'd be suprised if it's breeding up there.

Wherever it came from, it seemed a most unlikely moth to see flying in an urban street...which just goes to show that interesting moths can turn up almost anywhere.
Posted by GMT at 20:35
Email ThisBlogThis!Share to TwitterShare to FacebookShare to Pinterest