There are quite a few rare micro-moths on Dyer's Greenweed (there's even a Butterfly Conservation factsheet devoted to them, see here).  One of the reasons the moths are rare is that greenweed is a much declined plant of old pastures. Another reason is that management of remaining stands of the plant is often inappropriate for the moths, for example heavy grazing or mowing in late spring or early summer would remove any micro-moth larvae that would be feeding on the plants at the time.

Last year I found a larva of Mirificarma lentiginosella on greenweed on a chance visit to Cosmeston Lakes CP (see blog post here). I followed this up with a survey for Butterfly Conservation at Lavernock Point Nature Reserve last week, and was delighted to find not only quite a few M. lentiginosella larvae, but also four larvae of the rarer Agonopterix atomella. The latter species was only known from around 10 UK sites, with no Welsh records since the 1970s (those were in Gwent, where I failed to find it on surveys in 2014-2015).
Encouraged by this I thought it was worth a more extensive search at Cosmeston, and a visit yesterday resulted in a couple of M. lentiginosella and, more excitingly, seven larvae of A. atomella. These were spread over a wide area, in three different fields. 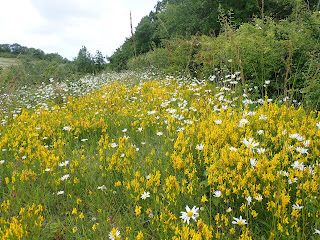 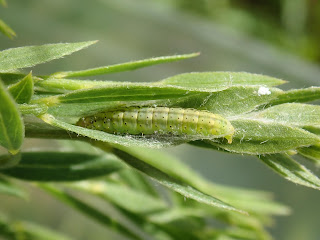 So we now know of two Welsh sites for these scarce moths, both in Glamorgan and separated by only a mile or two. The moths might be out there somewhere else, but there aren't many sites with good stands of the foodplant.
Posted by GMT at 15:06
Email ThisBlogThis!Share to TwitterShare to FacebookShare to Pinterest