On a family visit to Cosmeston on 10th June I noticed some good stands of Dyer's Greenweed in the meadow adjacent to the kids' playground. Having done some targeted surveys for rare micro-moths on this plant in England the previous week, I couldn't resist a look for larvae. After a bit of searching I found a spinning with a larva which looked a good match for Mirificarma lentiginosella, but with no Welsh records of this moth since one in Pembrokeshire in 1875 it was necessary to try and rear it through to confirm the ID. 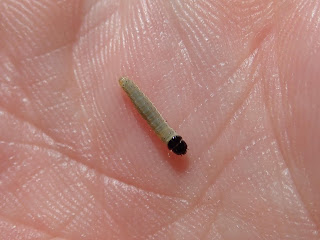 Although the larva fed up and pupated successfully, by early August no moth had hatched and I'd assumed the pupa had dried out in the hot weather. So I was delighted this morning to find a newly-emerged adult in the pot, confirming it as lentiginosella - exactly two months after I collected the larva.

There is quite a lot of greenweed at Lavernock Point and it will be worth some searches there...the icing on the cake wound be finding Agonopterix atomella, which has a couple of old Welsh records from Gwent.
Posted by GMT at 14:21
Email ThisBlogThis!Share to TwitterShare to FacebookShare to Pinterest