I've recently been going through some old specimens retained in 2007 just after I'd moved house, when I was in a state of chaos and stuck a few things in pots 'to look at later'. Much later as it turned out.

One pot had three identical micros found indoors in April 2007, which have been confirmed as Prays citri, a pest of citrus flowers and young fruit. We were bought a lemon plant as a house warming gift about a week before the moths turned up, which explains their origin.

Anyway, it's new for Glamorgan and possibly also Wales, though as it came in via a garden centre the exact location is a bit irrelevant.

Martin Honey has requested a specimen for the Natural History Museum as apparently they don't have one! 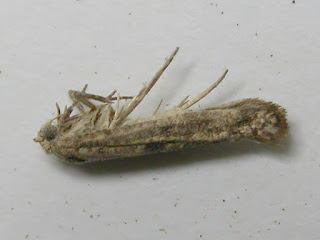 Posted by GMT at 09:35
Email ThisBlogThis!Share to TwitterShare to FacebookShare to Pinterest