I set the trap at the small nature reserve owned by Dow Corning last night and had some hopes of migrants given the wind but it turned out rather damper (and windier) than i was expecting and there was a suspicious lack of moths around the trap, possibly as a result of my not being able to get on site until 6. Nonetheless 12 species with a few new for the year including spectacle, peppered moth, setaceous hebrew character, small square-spot, marbled minor agg., iron prominent and common marbled carpet. A fresh herald was also nice. There was only a couple of micros which i've shown below - photos aren't quite of Chris's quality but i blame the wind...
Is this Elachista atricomella? 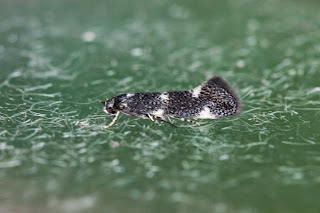 Not at all sure about this rather dingy specimen - my best guess was Scrobipalpa acuminatella but no real idea. 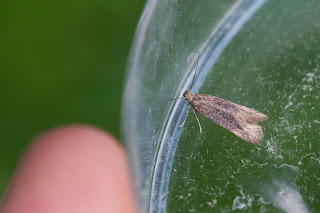 Posted by Vaughn Matthews at 17:17
Email ThisBlogThis!Share to TwitterShare to FacebookShare to Pinterest