I was up at Mountain View Ranch (top of Rhiwbina Hill, formerly part of Mountain View Golf Course) with the kids yesterday. It was generally a bit cold for insects but I did find quite a few Eriocrania mines on a birch tree, which proved to be E. salopiella. All the mines I checked had exactly the same form: they started about half way between the midrib and the edge of the leaf, formed a narrow gallery to the midrib and then doubled back, before forming a large blotch (see photo below).


I opened one up to check the larva and it had the bulges on the first abdominal segment which are characteristic of this species. This seems to be only the second county record, but I think all the birch-feeding Eriocrania are very under-recorded as most of us don't usually look at leaf mines at this time of year (myself included).

And one for Dave - this female tiger cranefly Nephrotoma crocata was ovipositing into damp sand in a former golf bunker. It was too hyperactive for a better photo outside the tube. 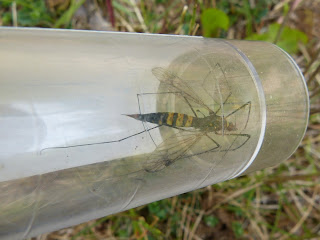 Posted by GMT at 23:19
Email ThisBlogThis!Share to TwitterShare to FacebookShare to Pinterest