I finally plucked up the courage to dissect this large Caloptilia caught in the garden last July. The dark band in the cilia made me think it might be the very rare hemidactylella, rather than the common betulicola or elongella, both of which lack this dark band. 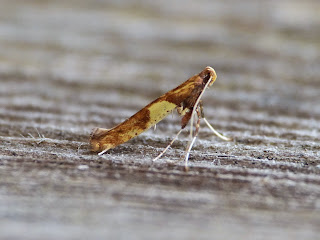 It turns out to be none of the above! It is in fact the summer form of C. falconipennella. I've caught this species before in the spring, but that form (which overwinters) looks very different.

This is the 4th VC41 record of this species, three of which are from my garden. I suspect they breed on the native Alders by the River Taff, but they might be coming from one of the Italian Alder street trees, of which there are a couple not too far away. Dave has found larval cones at Dare Valley, but I keep forgetting to look for them at the right time of year.

George
Posted by GMT at 13:36
Email ThisBlogThis!Share to TwitterShare to FacebookShare to Pinterest