I called in at the Graig yesterday afternoon to check on the Anania funebris population. I only saw one (compared with 20+ on a similar date in 2014) but there was still plenty of goldenrod so hopefully they're just a bit late coming out.

More of a surprise was 13 Small Pearl-bordered Fritillaries. They were apparently lost from this site in the early 2000s after years of neglect, but seem to have returned (probably from Llantrisant Common) following bracken/scrub management by RCT council and the South Wales BC branch, and the introduction of pony grazing. 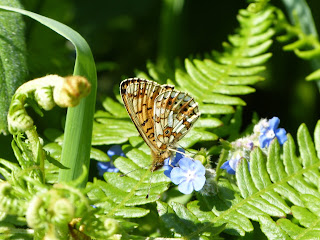 I also had a few micro species including Adela fibulella on Germander Speedwell.
Posted by GMT at 22:40
Email ThisBlogThis!Share to TwitterShare to FacebookShare to Pinterest