I had a poke about with a torch on the saltmarsh at the Ogmore rivermouth (east bank) on 18th August. I was mainly looking for strandline beetles but also netted this tawny-coloured Coleophora (dead moth shown in photo below). 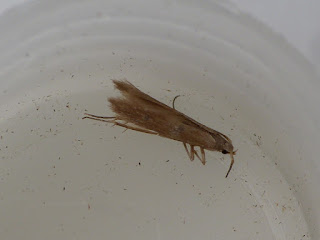 I've now dissected it and it is a male C. salicorniae, only the second VC41 record of this species following one at Penylan, Cardiff in 1990. I didn't see any glassworts at the site but I'm sure there would have been some not too far away.

Posted by GMT at 19:31
Email ThisBlogThis!Share to TwitterShare to FacebookShare to Pinterest