We also set out two traps at Brynna Woods & Llanharan Marsh last night - a 12V actinic near the marsh and the MV in the woods. I'm not sure the site has been trapped at this time of year before so almost all the species will be new to the site I believe. The actinic only had 5 species with a dark-barred twin spot carpet the first one I've seen this year I think. The MV in contrast had 24(ish) species - I say 'ish' as I have a few pug photos to trawl through...
Highlights for me were Semioscopis steinkellneriana, small phoenix (FFY), grey birch, white-spotted pug, Phyllonorycter quercifoliella, a few Dyseriocrania subpurpurella, Caloptilia stigmatella and a micro that looked like Eriocrania unimaculella but I don't think you can confidently id it to species with the adult can you? And it flew off before I could photograph it...
There was also this very distinctive micro which I can't find in the book - very frustrating! 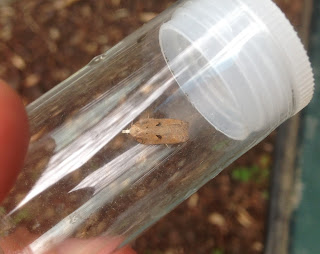 All in all a successful night's trapping though with the benefit of an orange ladybird in the MV and a grasshopper warbler reeling on the marsh.
Posted by Vaughn Matthews at 15:42
Email ThisBlogThis!Share to TwitterShare to FacebookShare to Pinterest