Having listened to the fascinating if depressing at times talk on rare moths at the BC AGM on Saturday, I thought I would have a quick look at some of the Dock stems just behind the shingle bank at Gileston.  Sure enough, there were exit holes! 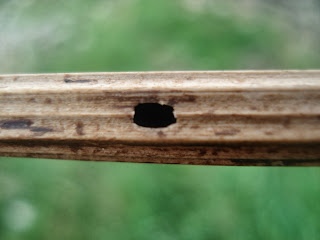 I'm not suggesting this is a Fiery Clearwing exit hole as that would be a somewhat remote possibility, but I wondered if anyone had any ideas for more likely candidates?  The hole was about half way up the stem and looked like it was at the top of the section where the pith had been mined.  Plenty of crumbly brown frass in there too.
Posted by Adam Mantell at 20:36
Email ThisBlogThis!Share to TwitterShare to FacebookShare to Pinterest