I'm finally back from SPBF surveys in North Wales, and have been rather jealously looking through the recent postings about migrant moths. However, I didn't entirely miss out, as on 28 June I chanced across an unusual looking plume flitting about in an unprepossessing marshy field near Bala. Andrew Graham has confirmed it as Oxyptilus laetus - probably only the second Welsh record of this Mediterranean species. Thanks to Janet Graham for the photo: 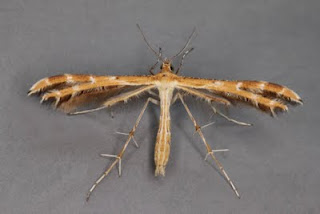 I've also seen Forester moth on 6 sites in Merioneth - they seem quite a bit commoner up there than down here.
Posted by GMT at 14:21
Email ThisBlogThis!Share to TwitterShare to FacebookShare to Pinterest