Out of the eighteen species trapped in my garden on the 1st, for the GMS, six were non GMS species (not on the GMS list), these included the three highlights, as far as I'm concerned: Pyrausta aurata, Scalloped Hook-tip and Treble-bar.

Also on the 1st (it's taken me this long to recover enough to white this), Mike Hogan and I ran our skinner traps for five hours (22:00-03:00), on Mynydd Aberdar. Each trap was treated separately and in mine, I had forty three species, including:
Neofalcata ericetella, Mompha raschkiella, Scoparia pyralella, Dioryctria abietella, Pyla fusca, 8 Fox Moth, Scorched Wing, Lead Belle, Water Carpet, a Large Yellow Underwing, 17 Glaucous Shears, Light Knot-grass and the Coronet. 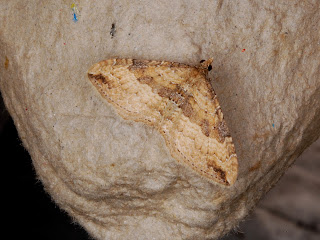 Included in the catches in both traps were three of the above Geometrids. There were two in my trap and one in Mike's. Try as I might, I cannot come to any firm conclusion about them, but whatever they were, they were all identical and totally unfamiliar to me. As far as I can see, they were either a form of Yellow Shell, but they also have a resemblance to the Gem. I've looked online and can't find any records of Gem in the country, so is it Yellow Shell??? Comments, please.
Posted by Mark Evans at 12:50
Email ThisBlogThis!Share to TwitterShare to FacebookShare to Pinterest