Not such a quick job going through the trap this morning!  33 species including at least three new for the garden: Bactra lacteana/lanceolana, Campion and an Oak Hook-tip.  A lot of Chinese Characters and Brimstones on the wing too.  Like George, no Orthosias with the exception of a single Hebrew Character.

The mystery of the night was the moth below.  While it is quite battered, I thought there would be enough features to allow at least a tentative id, but I haven't got anywhere with it.  Any ideas on that one? 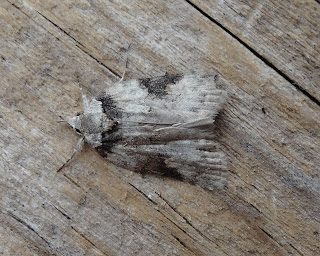 It fairly pronounced labial palps which are not immediately obvious from the photo, and wingspan is just over an inch.
Posted by Adam Mantell at 09:51
Email ThisBlogThis!Share to TwitterShare to FacebookShare to Pinterest