A mothing friend was visiting from Devon and wanted to see Devonshire Wainscot so we went to Caswell Bay cliffs.
It was beautifully warm but the full moon did't look too promising and there was hardly anything coming in by midnight so we left the traps out and came back at dawn.
Thank goodness we did! By then there were 16 Devonshire Wainscot, several Northern Rustic (both new to my visitor), Annulets, Pyrausta cingulata etc.
The undoubted star of the show, though, was the aptly named Star-wort. There was one fresh one in the lower trap and a very worn one in the top trap, which would seem to indicate a colony nearby. There is no Sea Aster but there is Golden Samphire which has a similar flower which is what the larvae mainly eat. I'll have to have a larva search in a month or so!
This is a scarce moth that I've never seen in the wild and nor had my visitor so he was well chuffed with the night's catch. We also realised that although he had travelled 175 miles to get here we are actually in the same 100k SS grid square. 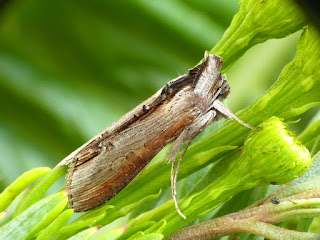 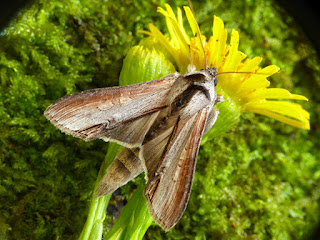 Posted by Chris Manley at 16:52
Email ThisBlogThis!Share to TwitterShare to FacebookShare to Pinterest