The temperature barely dropped below 16C on Friday night, resulting in my best box of the year so far. 130 moths of 56 species, almost half of which were new for the year. There were 7 pugs with no apparent, to me anyway, identifying features but also 4 stunning little V-pugs.

I don't usually get a lot of micros but 45 turned up on Friday, albeit 21 of these were C. culmella. Of the 16 species almost half were new for me.

Some I'm not sure of, so would appreciate confirmation (or more likely - correction). I have some other micros that have so far eluded ID but I'll post those separately. 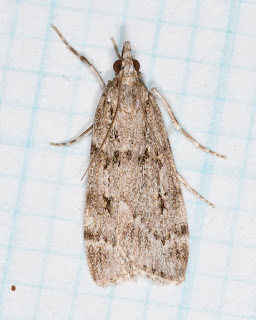 The next one was fairly battered, having lost one of it's hind wings ... and a lot of scales. I have used b&w to more clearly show what marking there were. Despite condition, it flew away quite happily when released. I think it may be Satin Beauty. 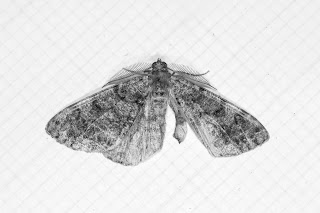 Posted by Howard Burt at 12:05
Email ThisBlogThis!Share to TwitterShare to FacebookShare to Pinterest