Paul and I were accompanied by Graham Anderson for a long hot session at Merthyr Mawr NNR last night. At 3am I was dressed only in t-shirt, shorts and sandals, and the temperature was still in the 20s.

Given the conditions it wasn't surprising that the moths came thick and fast. I only ran my MV for two hours (due to an initial generator problem) and had around 100 species, with quite a few extras at my 6W actinics. There were lots of moths at Paul's MV lamp too.


Other insects included several glowing glow-worms and this rather smart caddis Grammotaulius nigropunctatus. 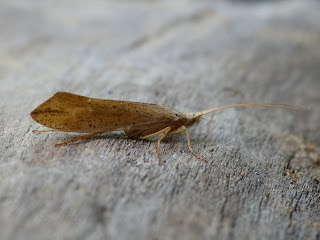 Posted by GMT at 22:28
Email ThisBlogThis!Share to TwitterShare to FacebookShare to Pinterest