It's been sadly lacking in any noteable species so far compared to last year.

I've trapped as much as able over the last month and had nothing to post about really. I wonder if we will have an Indian summer with a mass influx.

Usual Hawks, Eyed, Poplar, Elephant, Lime - no Small Elephant this year or migrants. I've noticed a large amount of bees and bumble bees this year, along with another Large white butterfly in the trap. Cockchafer are still coming in numbers although have dropped off now.

It looks as if I have a Miller Colony along with a Vapourer  here in the Garden. I'm getting Miller's every time I run the trap with five or more usual and I've found dozens of Vapourer larvae, females on the hazel tree with a male or two in the trap most nights.

Heart and dart have been in far lower numbers and same can be said for Dark Arches. 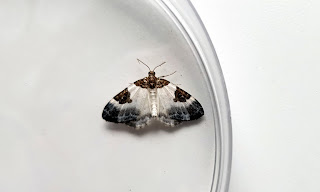 Hopefully weather will continue to improve over the course of the next few months.
Posted by Stephen at 12:42
Email ThisBlogThis!Share to TwitterShare to FacebookShare to Pinterest