Another new species for the garden last night in the form of a Wax Moth Galleria mellonella. This species appears to have declined in Cardiff, with only one other record since 2006, having formerly been quite frequent.
The catch comprised 52 species which is as good as it gets in my garden in mid August. Also of note were Cypress Pug and this brown lacewing which appears to be Hemerobius atrifrons, a local species associated with larch (of which there is none locally). I'll seek confirmation from Colin Plant. 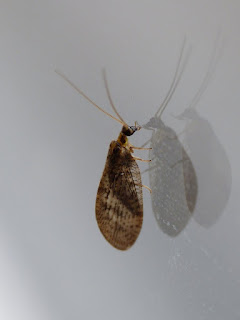 Posted by GMT at 13:43
Email ThisBlogThis!Share to TwitterShare to FacebookShare to Pinterest