This weekend gone in Broughton

A mixed bag of weather over the weekend, but we did manage to trap Friday night (31/7). We caught 43 moths of 22 species, but the highlights were Ypsolopha scabrella, Crambus perlella, Crambus tristella, Crescent Plume, Wormwood Pug, Blastobasis adustella, Small Blood-vein, Rosy Footman and July Highflyer, all new for the site for us.

Thanks to BS and CJ for chipping in Twitter / FB and assisting us with a very well marked Small Blood-vein which had us snookered for a while. The catch was dominated by 16 White-line Dart and we also had some very pretty Acrobasis suavella. Including day flyers, this takes our year list here (including 6 trappings) to 101 species (74 macro / 27 micro). Since we began trapping here a year ago (9 trappings) we've now recorded 135 species (94 macro / 41 micro). 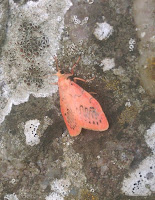 There are quite a few Grayling, Small Blue and Gatekeeper on the wing in the area all the way over to Burry Holms and Llangennith burrows.We also saw 2 Hummingbird Hawkmoths over the weekend, one on Broughton Farm caravan park and one up on Broughton Burrows before you descend to Burry Holms.

James and I ventured over to Burry Holms 1/8 where we recorded an Emperor Dragonfly (over Spaniard's Rocks), 2 Peacock butterfly, 10 Meadow Brown, 1 Small Copper , 2 Six-spot Burnet moth and 1 Dark-barred Twin-spot Carpet. We've now recorded 20 species of butterfly in the area in 2014 and 2015.

Also a rare vagrant was recorded in Broughton in the form of MCP, which was nice to see! :)

Mike & Emma Cram & family
Posted by Unknown at 18:40
Email ThisBlogThis!Share to TwitterShare to FacebookShare to Pinterest