I trapped here on tuesday night and had about over 110 moths of 60 species in total with dingy footman making up most of the total. New macros for the year were August Thorn, Pebble Hook-tip, Chevron and Ruby Tiger.
As far as micros go i had a few new for the year including this Catoptria pinella(?) which if confirmed is the first time i've had the species at Parc Slip: 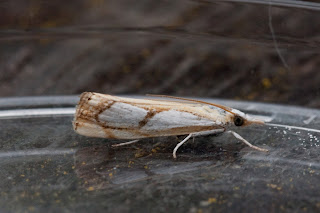 
Posted by Vaughn Matthews at 08:24
Email ThisBlogThis!Share to TwitterShare to FacebookShare to Pinterest