Another unusual leafminer at Coryton

Coryton roundabout has a history of producing interesting records, such as the scarce, supposedly ancient woodland leafminer Phyllonorycter muelleriella found there a few years ago. I stopped off for a few minutes on the way back into Cardiff this evening, and walked the path which runs between The Village hotel and the south side of the roundabout. A mine on Dogwood caught my eye, and on closer inspection at home proved to be Antispila metallella, with the distinctive cut out made by the larva to make a case for pupating on the ground. 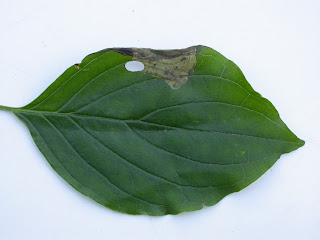 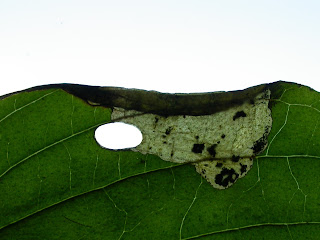 The final photo shows two 'trial slits' at the start of the mine, made by the female ovipositor, which separates the mine of Antispila metallella from the similar mine of A. treitschkiella. There is only one previous VC41 record of metallella, made by Barry and Sandra on Gower back in 1995.

Posted by GMT at 20:52
Email ThisBlogThis!Share to TwitterShare to FacebookShare to Pinterest